Breaking Benjamin is an alternative metal band from Wilkes-Barre, Pennsylvania

Formation
Formed in 1998 by vocalist Benjamin Burnley and drummer Jeremy Hummel, Breaking Benjamin quickly garnered a strong local following in their home town of Selinsgrove, Pennsylvania. The band derived their name from an incident when Burnley was covering a Nirvana song during an open mic night at a club when he knocked over the microphone to the ground, breaking it. The person who owned the microphone came on stage and said, "Thanks to Benjamin for breaking my fucking mic." In 1999, the band briefly renamed themselves "Plan 9." In late 2000, after various line-up changes, the band changed its name back to "Breaking Benjamin" and two friends of Burnley, Aaron Fink and Mark Klepaski, left their previous band, Lifer, and joined the ranks of Breaking Benjamin as guitarist and bassist, respectively. According to the band, the Breaking Benjamin logo, a variation of the Celtic knot, was found in a tattoo book by a fan. The logo is also tattooed on the left wrist of Ben Burnley, Aaron Fink, and Mark James Klepaski, and the right wrist of Chad Szeliga. The band is currently signed to Hollywood records on a five record deal, having released three so far. They achieved their first number 1 single in 2007 with the track "Breath" off their third album Phobia.


Saturate
The band signed to Hollywood Records in 2001 after the success of an independently-released, self-titled EP, which sold all 2,000 copies that were manufactured. Hollywood Records released their full-length, major-label debut, Saturate, on August 27, 2002. The album peaked at number 2 on the Billboard Top Heatseekers Chart and at 136 on the Billboard Top 200.

The album's first single, "Polyamorous", received a fair amount of radio play, although it failed to reach mainstream audiences. A video was released in two different versions for Polyamorous: one that had all live-action footage, and one that had footage of the video game Run Like Hell. The song was also used for the video games WWE Day of Reckoning, WWE Smackdown vs. Raw, and WWE Wrestlemania 21. In addition the song was played during an episode of the TV show "8 Simple Rules."

The second single "Skin" was also released from Saturate, although it fared worse than "Polyamorous" and received even less airplay."Skin" was also performed live on several talk shows including "Last Call: With Carson Daly," "The Late Late Show With Craig Kilborn" and "Jimmy Kimmel Live." Singer Burnley has been known to state his disdain for the song during live performances and has the crowd sing the words as the band plays.

"Medicate" was also released as the third and final single, to little commercial success and airplay.

"Wish I May" the first track off of the album was played during the end credits of the horror film Wrong Turn.

At live performances, Breaking Benjamin often plays a brief sound clip of the Wicked Witch of the West prior to playing the track "Home", which has its lyrics largely influenced by The Wizard of Oz.


We Are Not Alone
Breaking Benjamin released their second album, We Are Not Alone, on June 29, 2004. The album featured the lead off single "So Cold", which reached number two on the United States Billboard Mainstream Rock chart. The promotional wheel was put behind the track as the band performed live on various talk shows such as "Late Night with Conan O'Brien," "Last Call with Carson Daly," and "Jimmy Kimmel Live." The song has a lengthy history as the band had written 2 other songs before they were finally combined to become "So Cold". The first was "Inertia", then "Always", neither were released, but have been played live. The band had two music videos made for "So Cold." one of which was a promotional video made for the movie Hellboy. "So Cold" spent 37 weeks in the top 20 of the Billboard charts (as of February 3, 2005). The commercial success of "So Cold" led to We Are Not Alone debuting at number 20 on the Billboard 200 selling 48,000 copies and achieving platinum status in late 2005.

Also released as singles from the album were "Sooner or Later" and a re- recorded version of "Rain", which was featured on later pressings of the album. "Sooner or Later", had a video created for it and got a fair amount of radio play reaching number two on the Mainstream Rock Charts. The track was also featured during an episode of the tv show "Summerland" and performed live on "The Tonight Show with Jay Leno."

The tracks "Rain," "Forget It" and "Follow" were all co-written by the guitarist and vocalist of The Smashing Pumpkins, Billy Corgan. Breaking Benjamin and Corgan's collaboration took place for six days in December. Burnley admitted he was at first nervous to work with Corgan, but later felt comfortable and called the experience one of the highlights of his career.

During a tour in support of "We Are Not Alone" Aaron Fink's father joined the band on tour, whose music collection is what originally sparked Aaron's interest in music. Gary Fincke is a professor at Susquehanna University and wrote Amp'd: A Father's Backstage Pass about his travels with the band. The track "Breakdown" was featured in a commercial for the ABC Family movie The Hollow."

The track "Forget It" was featured on an episode of the TV show "Smallville," during a scene in the movie "American Pie Presents: Band Camp," and during the end credits of "National Treasure."

The track "Firefly" is featured on the video games "WWE Wrestlemania 21", "WWE Day of Reckoning", and "WWE SmackDown! vs. Raw".

The band never travels outside of the U.S. and Canada due to Ben Burnley's fear of flying (though he said he would love to play outside the States and will go as far as a boat will take him). This is referenced in the song "Break My Fall."

In September 2004, drummer, and founding member of Breaking Benjamin, Jeremy Hummel was relieved of his duties in the band. Subsequently, on September 28, 2005, Hummel filed a federal lawsuit against the remaining members of Breaking Benjamin, as well as its management, claiming he was not paid for songs he helped write. Hummel's lawsuit asked for more than $8 million in damages. An article was released October 25, 2006 stating that Hummel does not receive any payments from the making of We Are Not Alone in which he co-authored.


So Cold EP
Later in 2004, the band released the So Cold EP. The EP contained live recordings of We Are Not Alone's "So Cold" (an acoustic recording), "Breakdown", and "Away", as well as studio recordings of "Blow Me Away", a song that was featured in Bungie's video game Halo 2, and "Lady Bug", an early fan favorite of the band's.

The band contributed a cover of Queen's "Who Wants to Live Forever" to Killer Queen: A Tribute to Queen.


Phobia
In the fall of 2006 the band began a tour opening for Godsmack for the IV tour, hitting up mostly eastern and Ohio Valley venues, and soon moving out west, still in support of the Phobia album. Several of the shows had been cancelled, or turned into Breaking Benjamin headliners due to scheduling conflicts. Many of Breaking Benjamin's tour dates from December 3rd have been rescheduled due to illness in the band's ranks. All dates were rescheduled as the band announced another headlining leg before going on a nationwide tour with Three Days Grace and Nickelback.

On February 11, 2007, HDNet premiered a one-hour show of the Breaking Benjamin concert in Bethlehem, Pennsylvania at Stabler Arena. This is also the concert that was included on the Phobia re-release DVD in April 2007, advertised as "The Homecoming". The band recently obtained their first number 1 billboard single with "Breath". Footage of the band's live Stabler Arena performance of "Breath" comprises the song's music video. On April 17, 2007, Breaking Benjamin re-released the album Phobia. The album featured a DVD with about an hour of their Stabler Arena concert footage. They completed a co-headlining tour in the United States with Three Days Grace and had Red and Puddle of Mudd as openers. The album re-entered the Billboard 100 at number 38 on May 5, 2007 with its reissue.

On June 29, 2007, the band appeared on Jay Leno and they performed "Breath". On July 6, 2007, the band performed "Breath" again on Craig Ferguson. The band did not perform as scheduled on July 9, 2007 at the Tabernacle in Atlanta due to an illness that Ben had. Two other concerts wrapping up their tour (in Myrtle Beach, SC on July 10 and Greensboro, NC on July 11) were cancelled as well. On their website, they announced that Burnley was ill and unable to perform in Atlanta and at the two remaining shows. Rumours that the band was breaking up turned out to be false, as the band announced a 36-date fall 2007 tour with Three Days Grace, Seether, Skillet (first half) and Red (second half).

New Album 2008
The producer of the album is David Bendeth who produced the band's last two studio efforts, We Are Not Alone and Phobia. The album is tentatively planned to be released by the end of the year. Breaking Benjamin also performed with Seether at the York Fair in York, PA on September 10th. 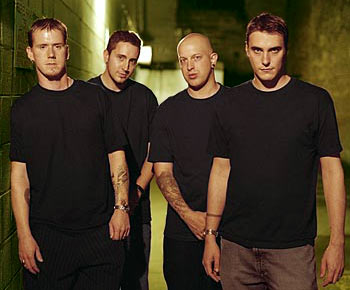 One of my favorite bands. What do you think?

Ya, Phobia's my favorite album too. They've gotten better everytime so far. Although Saturate seems like it gets better everytime i listen to it. The hidden track "Forever" is amazing from that album. My all-time favorite would have to be "Until the End." I thought radio should've been bumpin that one a lot more but for some reason, "Breath" got all the glory which is a great track as well.

ubane wrote:the only song i like by them is blow me away that is a fricken wicked song

One of my favourites at the moment. I love Firefly, Breath, So Cold, Dance With The Devil, Until The End and Polyamorous. I like other songs of them as well, but those listed are the main ones I listen to.

I love Breaking Benjamin, first song I heard was Firefly, and I loved that song to bits. Their last album I also think is pretty great.

Love breaking benjamin, first song of theirs I heard was Blow me away, loved it, listened to others, then realized breaking benjamin was the second greatest band on this earth in my opinion.
The music is excellent.