“You can’t quit until you try/You can’t live until you die/You can’t learn to tell the truth/Until you learn to lie…When you’ve lost it all/That’s when you finally realize/Life is beautiful.” “Life is Beautiful,” The Heroin Diaries soundtrack Most people know Nikki Sixx as the bassist and founding member in one of the most successful bands in rock & roll, Mötley Crüe. Others are aware of him as a member of Brides of Destruction, or a producer/songwriter who’s contributed to albums by Meat Loaf, Saliva and Marion Raven. Still others have read about him in the ground-breaking book, The Dirt, learning how he grew up with a single mom and her abusive boyfriend after his father abandoned him at an early age, then how he was shuttled to various homes, raised by his grandparents before becoming a teenage vandal - breaking into homes, shoplifting and finally expelled from school for dealing drugs. And while the Crüe song, “Kickstart My Heart,” recounts Nikki’s near-death experience after a drug overdose on December 23, 1987, The Heroin Diaries reveals the Sixx saga in a way that a so-called rock star has never done before, opening himself up and laying bare a point at which he’s at his lowest.

On Christmas Day 1986, Nikki should have been enjoying the fame and kudos of being a multi-million dollar mega rock star. Instead, he spent the day alone, naked, cradling a shotgun and shooting up smack under a Christmas tree in a big empty mansion in Van Nuys, CA. The book recalls a harrowing year of addiction that led to Nikki’s spiritual death and re-birth, from Christmas ’86 to the fateful day when he had to be revived by paramedics. The writings all come from diaries he kept during those 12 months in Hell, with his own subsequent comments and clarifications added on. The Heroin Diaries is a devastating, first-hand and candid account of a troubled soul collapsing at the seams, a member of one of the most infamous and wildest rock bands in the world, a tale of decay told by both its tragic anti-hero and the people around him. It is also a story of recovery, of an abject figure fighting a crippling addiction and finally, somehow, emerging with his sanity bruised, but intact, an inspirational narrative, and one which should inspire anybody fighting the same terrible demons that consumed Nikki Sixx. This included all-night heroin and coke binges that would end with Sixx cowering in the walk-in closet to his bedroom; paranoid and hallucinatory delusions climaxing with desperate phone calls to police of security companies; violent and abusive relationships with family, friends, lovers and fellow band members; a love affair with the needle that would only end, on Dec. 23, 1987, when it literally killed him. Stumbling across his own journals several years ago, Sixx realized The Heroin Diaries would be a devastating antidote to any deluded kid who feels, as he once did, that heroin addiction is in any way glamorous or alluring.

The Heroin Diaries, co-written by Sixx and music journalist Ian Gittins, published by MTV Books and Simon & Schuster, will be preceded by a soundtrack on Eleven/Seven Music inspired by it, as Nikki got together with another pair of producer/songwriter/ musicians, his good friends James Michael and DJ Ashba, to create a musical accompaniment to the text. “I obviously lived the book, but they read it,” says Nikki of the collaboration, which was so successful it blossomed into the band Sixx: A.M. “It was great to be able to sit down with these guys, who know me so well and are two of my best friends, but didn’t know me then and submerse ourselves in that time. “We really pushed, pulled and developed this together, each of us contributing in our own way, three guys with one vision. To be able to do that, with the egos taken out of it, and just follow the music wherever it took us, was great.” The result closely follows the outline of the book, a year-long cycle of heroin use and recovery, the 13 original pieces, one for each chapter, from the opening “Xmas in Hell,” with its heavy metal ode to the yuletide standard, “Carol of the Bells,” through the emotional crisis of the first single, “Life is Beautiful,” and the rueful acknowledgment of relapse (“Accidents Can Happen”) to the harsh condemnation of childhood (“Dead Man’s Ballet”), the painful steps of withdrawal (“Girl with Golden Eyes”), the acceptance of a higher power (“Permission”) and a celebration of ultimate spiritual rebirth (“Life After Death”). Together, Nikki, James Michael, who does all of the vocals on the album, and DJ Ashba, who provides the crackling, emotional undertow with his searing guitar work, come together to find the aural equivalent of The Heroin Diaries psychic underpinning. Nikki also reads excerpts from the book, accompanied by some of the most heartfelt and moving music he has written over the course of his remarkable career. “We never intended for this to be a band,” admits Nikki. “We didn’t plan on ever playing these songs live. It was never really about that. We were just three guys, and now, all of a sudden, we’re one. I love Mötley Crüe. They have been a huge part of my life - the most successful part - and I will continue to do it. But I needed to go over here for a while to exorcize the demons.”

The three grew increasingly tight, with both James and DJ finding themselves applying what Nikki was going through to their own situations. “James is one of my very favorite singers and people,” says Nikki. “I didn’t push for him to be the singer on the project… It came organically. And it was just wonderful because James has been through a lot of his own stuff, and this turned out to be very personal for him as well. There are parts of songs that he would probably tell you were about his own childhood, or DJ who’s one of my very best friends and extremely talented artist, I’m sure could point out many aspects of the album that he can relate to his life as well. Because it came from one vision and three guys, you’re going to get some different interpretations. I’m curious to hear how the listener experiences that. It connects on a level that people can take and make their own. These aren’t our songs anymore... They’re everybody else’s. Like your own children when they grow up and have their own lives.” Sixx, who will donate a portion of the proceeds from the project to his own “Running Wild in the Night” initiative for Covenant House, which helps fund creative arts programs around the country focusing on music, says the experience of writing and recording The Heroin Diaries has “grounded” him. “This has helped me grow roots,” he explains. “I feel so in the honesty and reality of ‘that was then and this is now.’ My life is so different. I feel so connected. I don’t know how to explain it, but I feel very humbled and very grateful.” He’s not sure whether he’s found God, but he’s more than willing to share his experiences in hopes it will do some good for others who can relate to his situation. “Addiction is one of the biggest problems we have on this planet right now,” he says. “What I can do as a tiny, tiny part of this work is just to give back. Maybe one person gets it, maybe 100, maybe 100,000, maybe a million. I’ll never know. If I can pass my knowledge on without being a preacher or without getting on a soap box, that would mean something. All I’m saying is, this is my experience. Read it, or not. Believe it, or not. Absorb it, or not. I’m not telling anybody what to do. I’m just putting my experience out there and hoping you can learn something from it.” “For me, the word ‘God’ was always hard to swallow. But think Hare Krish-na, Budd-ah, G-ahh-d… We say ‘ahhh’ when things make us feel good. The monks use ‘ahhh’ in meditation. I’m in ‘awe’ of my life, that I’m even alive. I’m in awe that I get to have the opportunity to spread this message. When I think God, I don’t think Jesus Christ. I think of a complete spiritual safety net, being able to let yourself go. I’m happy to go through life, see what happens and be in ‘awe’ of, be able to enjoy, the moment… and stop worrying about expectations or trying to predict the future. These are things I couldn’t do in the past. “I’m powerless to do anything now, because people will have their own opinions after they read the book and listen to the soundtrack. My deepest, darkest moments are out there. If you want to live life on your own terms, you’ve got to be willing to crash and burn. I’m just very proud to have so many amazing people around me. The difference between now and then is I have a support system. I wasn’t able to stay off drugs then. I am able to stay off drugs now.” The Heroin Diaries—the most addictive rock & roll saga since The Dirt. 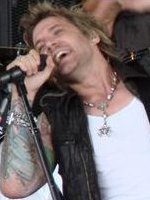 Yerrrr Sixx Am.....Nikki is the sickest guy out and dj ashba is maddd great side project for nikki

Sixx:Am The Heroin Diaries was A bad ass album