"All The Right Reasons" By Nickelback Album Review!

"All The Right Reasons" By Nickelback Album Review! 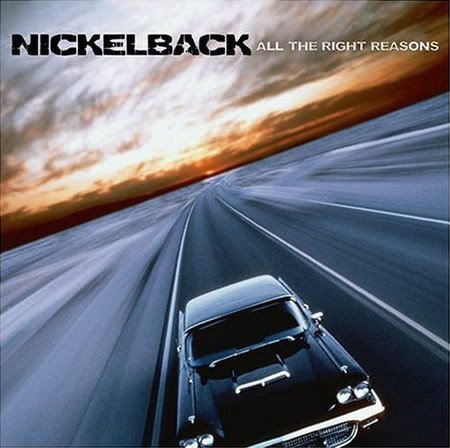 Ive Decided to do an album review on All The right reasons by Nickelback. The album that has sold more then 75 Million copies in under 3 years which is a great acheivement. Anyway down to business:

The album has 14 songs on the CD and ill rate them and then the CD at the end.

The track starts out with some brilliant drum fills. Then Chad Kroeger brings in a great guitar riff which is really catchy. Lyrics break out and id definately say this song would be hard rock. The Lyrics are great and well written especially the chorous. Probably when of the most well written chorous i have ever heard. Anyway the song keeps changing especially after the solo. So this is a great track to open the album.

2. Fight For All The Wrong Reasons!

This track is definately not the best track on the album. Its decent but not great. The riff is very short as well. But the lyrics are great. I think the riff was what didnt make this song good but other then that its decent. This was probably filler but its decent enough.

This song is just brilliant. Its soft yet addictive. It is definately a great reflection style song. The verses have the greatest lyrics i have ever heard and the chorus backs it up. Also a great feature to this song is its bridge. Its just epic! Definately a major part of this CD. If it wasnt on there then i dont think the CD would be the same.

This song is really intresting. There is a very slow chord progression at the start but as soon as Chad's voice hits it becomes heavy. Then when it hits the choros it becomes soft all over again. It is a great and clever piece by Nickelback. Definately one of there best and probably the best on the CD. I dont see any flaws to this song at all. Just a great track without a doubt.

This song = Epic. The lyrics are so dirty and they dont even need language. The riff is extremely catchy and the bass work from Dan Kroeger really shows in this piece. The song is quite heavy to. Very crude Lyrics but other then that its a brilliant song. Suprised it wasnt the major song of the album.

This song is very good, The song is basically about love and missing someone you love but it doesnt mean its a chick song. Its very soft but its a great song. Very smooth and was written really nice! Great song and the music video is great to.

My favourite on the album for sure. The start is phenominal and the whole song is solid hard rock to its best. Ryan Peake really displays his guitar work in this piece and Chads vocals are so strong. Alot of people Mock Nickelback cause there isiots but this one song could probably change there whole view on Nickelback. The song is about a Guy who is dating a chick who every guy likes and he is sick of it. So check it out for sure.

This song infact a tribute to the Late Great Dimebag Darrell who's Life was unfairly takin. Now as any Major Nickelback fan knows, Steven Joseph was Pantera and Slayer's Pyro Technician but then moved over with Nickelback and is now there pyro guy. So obviously Pantera would be a major influence on the band and the backstage crew. The song is Probably the heaviest ever. Its definately Metal and sounds like James hetfield on speed. So in other words its very fast. I think the song is quite solid but the guitar work could be better. IN a whole great song.

The song starts off with Piano work (Performed By Ryan Peake). Then Chad comes in with the vocals and it gets very catchy. Great drum work as well as bass work. Daniel Adair knows how to play a set of drums thats for sure. The song is about major moments (Negetive) in the world and what the hell are we doing to stop it. Anyway It mentions stuff like Live aid, Nelson Mandela etc in the music video. The song though is a great song and more of a contemporary feel.

10. Someone That Your With

Probably my least Favourite of the album. The lyrics arent great and the track seems very rushed. Its not bad but then again its not great either. Also i dont even get the song.

A Very well known song, Was really popular about mid 2006. Its very catchy even though it really just a bunch of lyrics. It basically why people wanna people want to be rockstars. Judging from this song, Nickelback really know how to write songs and this song is really good. The music video is poor but the song is great.

OVERALL REVIEW ON THE ALBUM:

You know how you buy that album that you like enarly every single one of those songs and it ends up ebing one of your favourite's.. Well this is one of those albums. There are so many great songs on it and the definentely know how to make an album. Its my all time favourite album so if your a nickelback fan or not i suggest you check out this album. Its a very solid album and seeming i love it i give it a perfect rating of 10/10.
_________________

and this board is pretty awesome.

WOW Not a fan of nickelback but very nice review

Thanks for the review

Nickelback rocks! If Everyone Cared should have scored a little higher than 7 though. That is an awesome song, Great to see Savin' Me get a prefect 10 though. These two are in my top 3 Nickelback songs

Don't get me wrong, but I think this is slightly biased. But you did a good job Classic.